This page lists details for some demonstrations of my research and teaching projects. I also have an online build log called "Engineering Mathematical Machines". Feel free to contact me about my projects!

(The content on these pages may be freely used for educational, noncommercial purposes provided appropriate references are provided. Commericial users are kindly asked to contact me first. Be aware that in any case, they come with no warantee: use at your own risk!)

This simple machine demonstrates that a viscous suspension (applesauce) suspended in water has a pretty low terminal velocity. After it reaches terminal velocity, it travels at a constant speed. This is well modeled by the transport equation.

Any demonstration involving the heat equation should involve fire. But how to easily measure the temperature of something hot? Simple: make use of the fact that digital cameras are already sensitive to the infrared emissions radiated by hot objects. They usually have a protective lens to filter out infrared, but it's easy to take an inexpensive webcam and remove the filter. Then you have an infrared webcam! 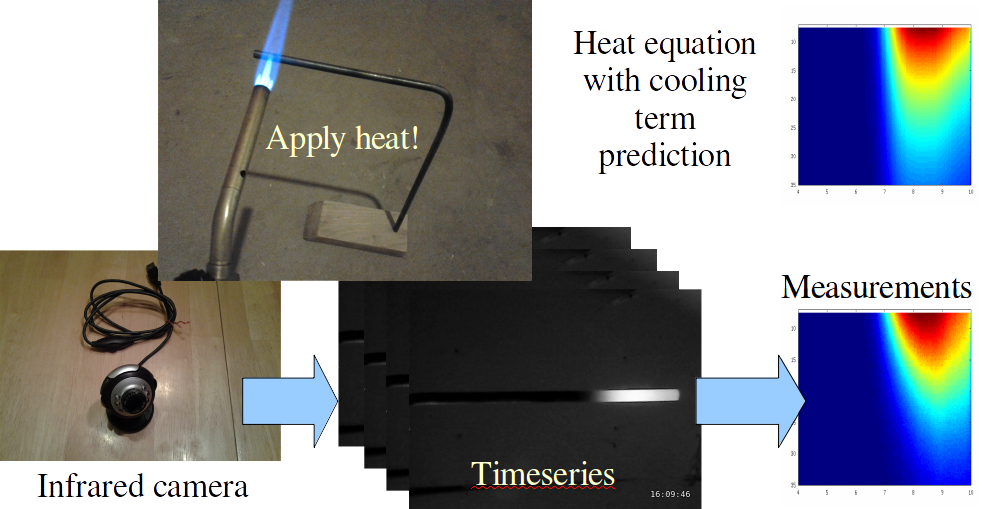 Then, take a metal rod and heat it with a torch so that it's glowing hot, and snap a sequence of pictures of it with the infrared webcam as it cools down. If you take enough pictures, you can compare the temperature as a function of time with the heat equation (you need to account for lateral heat loss, which is an extra loss term). The fit between theory and practice is not too bad!

Torsional waves on a wire can have very low propagation speeds -- they're so slow that you can see them moving. John Shive invented a simple machine to demonstrate these waves to his students. It's pretty easy to build a tabletop version yourself with a few parts from a hardware store. Then you can see wave propagation and standing waves quite clearly.

An excellent example of parametric curves can be found in the example of a Lissajous figure. These can be generated in a variety of ways, perhaps most commonly using the X and Y inputs of an oscilloscope. However, that's kind of high-tech. In the past, they have been generated mechanically, often involving vibrating strings. Most vibrating strings don't move very much, so some old experimental descriptions require looking at the Lissajous figures through a magnifier. A much simpler way to generate them requires two mirrors mounted on rotating axes at right angles to one another. A beam of light can be directed between the mirrors to project a Lissajous figure on a screen.

To make something suitable to show in a classroom setting, I made a frame that held two strings at right angles to one another. The strings are hung from screw eyes with wing nuts so that the tension can be adjusted. (This is inspired by the mirror galvanometer.) To each string, I attached two small mirrors (about 1" x 1" square) back-to-back with a little tape. I tried attaching one mirror to each string, but found that the assembly wasn't very well balanced -- two identical mirrors are much better balanced. The mirrors are aligned so that a laser beam can bounce off both mirrors before being projected onto a screen (usually the wall).

Which function decays faster: an exponential decay or a power law decay? This question is one of the things that L'Hospital's rule makes short work of in class, but can this mathematical question be answered with an experiment? Yes! In acoustics, sounds often decay sharply as energy is dissipated. For instance, the sound pressure of a bell as it rings tends to follow an exponential decay. Exponential decays also can be generated easily with a resistor-capacitor circuit. 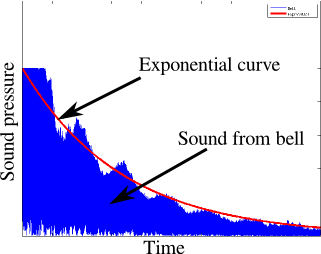 Power law decay is a little more subtle, but it's pretty well-known that sound pressure decays according to an inverse square law. This demonstration pits power-law decay coming from moving away from a sound source against the exponential decay coming from a resistor-capacitor circuit. In order to be easily moved, the circuit has to be small. Here is the circuit diagram. I built mine so that the separate functional components are easy to see and debug, should something go wrong.

L'Hospital's rule is about limits of ratios, so it's proper to have the circuit manipulate the ratio of the two signals. However, circuits that compute ratios are a bit tricky. It's much easier to compute logarithms and subtract, which is what this circuit does. The input stage to the circuit consists of a resistor-capacitor timer (triggered by a switch, and displayed with an LED) and a microphone audio amplifier. These are fed into a pair of logarithmic amplifiers. These feed into a difference amplifier, working as a comparator. The comparator drives the output LED. 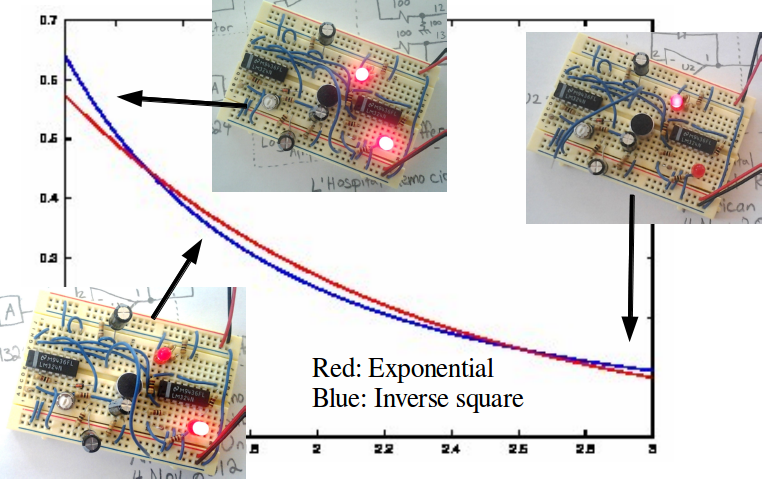 I found that the circuit was a little tempermental after it was built. This is mostly because of the fact that the logarithmic amplifiers can have pretty large gain because they're nonlinear. Once everything is adjusted correctly, the circuit does a nice job. If you're going to perform the experiment in front of an audience, you should practice until you have the technique mastered. First, you need a constant sound output. There are various ways to get this, for instance playing a sound file on your cell phone or laptop. (I like to use gst-launch utility on Linux to generate a tone.) However, it's also workable to whistle a clear, stable note, although this takes practice. Once you have the sound source working, here's what to do:

Here's a quick little demonstration that highlights some simple, old ideas. Dripping water happens to be a good timekeeper, and is a good introduction to related rates problems. It's pretty easy to make. Take a plastic funnel and melt the end shut with a candle. Then puncture the now sealed end of the funnel with a nail to make a small hole. Fill the funnel up with water, start a stopwatch, and mark off where the water level is (use a grease pencil) at some fixed time interval. It'll take a little trial and error to figure out what that interval should be. If the funnel drains too fast, seal the end again and make a smaller hole.

What do you do with this once you have it? Hand a student a stopwatch and have another student read off when the water level crosses the markers -- they're usually pretty surprised that the time intervals get farther apart as the water level goes down. Then, derive the rate of change of water level as a function of volume -- it's not a bad match if you use the volume of a cone.

I realized in preparation for the topological imaging experiments that there is little additional overhead required to apply traditional signal processing chains to the data collected. In this case, both the transmit and receive hardware is simply an off-the-shelf laptop and GNU Octave. 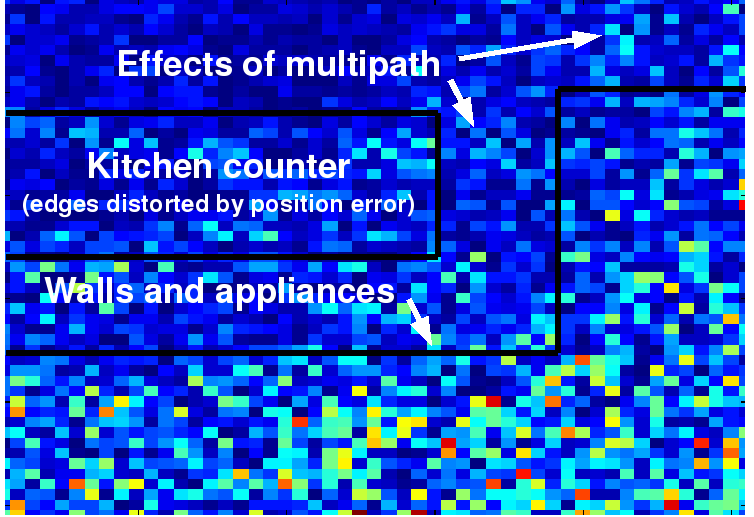 It is straightforward to write simple, non-optimized sonar image formation software. I have typically used my smartphone to act as the transmitter, by playing a carefully constructed audio file that contains a number of chirped pulses. I receive the echos through the microphone on my laptop computer, perform some noise equalization using the freely-available program Audacity, and then pass the data over to my processing chain in Octave.

The resulting imagery can sometimes be a bit difficult to interpret, especially since interesting environments are rarely two-dimensional, as typical image formation algorithms expect. The wavelength of sound is also physically quite long, so the effects of diffraction and reflection are quite pronounced, and produce noticeable bright spots at corners of a room. As far as I know, the only other instance of this kind of thing is here, and sadly it seems like it hasn't been updated in a while.

Working with acoustic data is very convenient because the experimenter can hear many problems instantly. In addition, since the rise of powerful multimedia frameworks such as GStreamer and python bindings for them, platform-independent, custom audio test equipment is very easy to construct. So I have availed myself of the opportunity and written a small collection of tools that the typical sonar engineer wants to have. 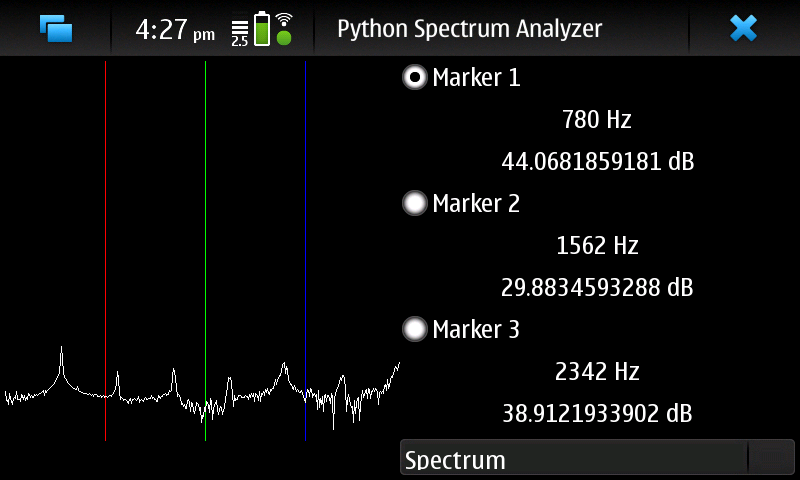 For instance, I have written an audio spectrum analyzer that can display the log magnitude spectrum, autocorrelation, or other desired functions of the received audio. Since the tool is written in platform-independent python, it runs on my Linux laptop (based on the x86 architecture) and my Nokia n900 smartphone (based on an ARM processor) with no changes to the code. 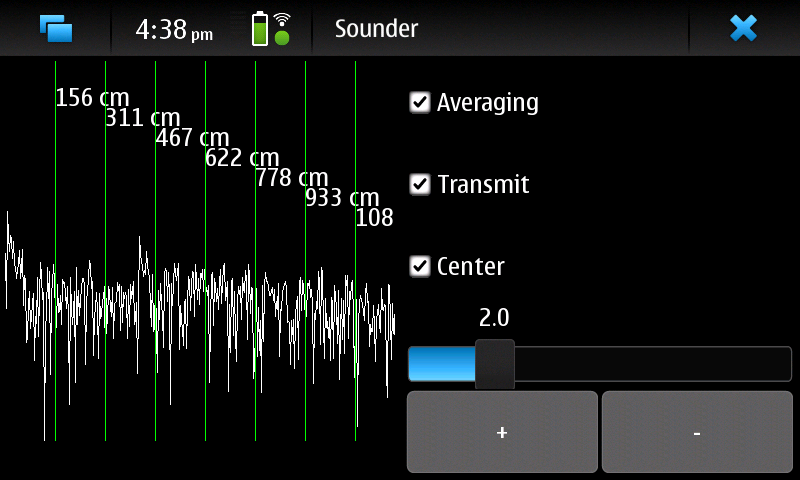 Sonar engineers are often in need of accurate ranging information, so I wrote a simple channel sounder. It emits a stream of brief clicks and then integrates the result. Typically, targets of high acoustic reflectivity (walls, for instance) appear as spikes on the display. Sadly, the user interface isn't as pretty as the iPhone sounder, but mine is platform-independent and interpreted, so it is extremely easy to modify to fit my needs. 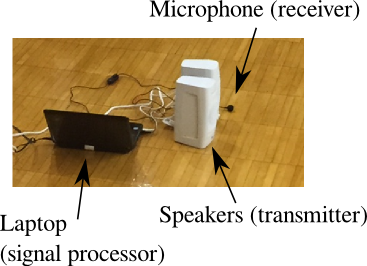 With very little equipment, you can run a real-time sonar system! It requires

If you're using an Ubuntu system most of this comes standard, but you'll need the following packages:

This experiment demonstrates the signal space embedding theorem (see "Topological localization via signals of opportunity") for acoustic signals. The basic idea is that a collection of simple transmitters (special hardware used, but it's not crucial) emit signals received by a single receiver (laptop computer sound card). In order to provide some discrimination of which received signal corresponds to which transmitter, the transmitters emit short pulses, one after the other. The transmit sequence is enforced by a simple one-wire handshake. As it happens, the software framework for receiving supplied below loses synchronization frequently, so we can only identify transmitters up to a cyclic permutation. Even in spite of this, the signal embedding theorem guarantees unique signal response for each receiver location if enough transmitters are present. Downloadable items for conducting the experiment: ZIP file here 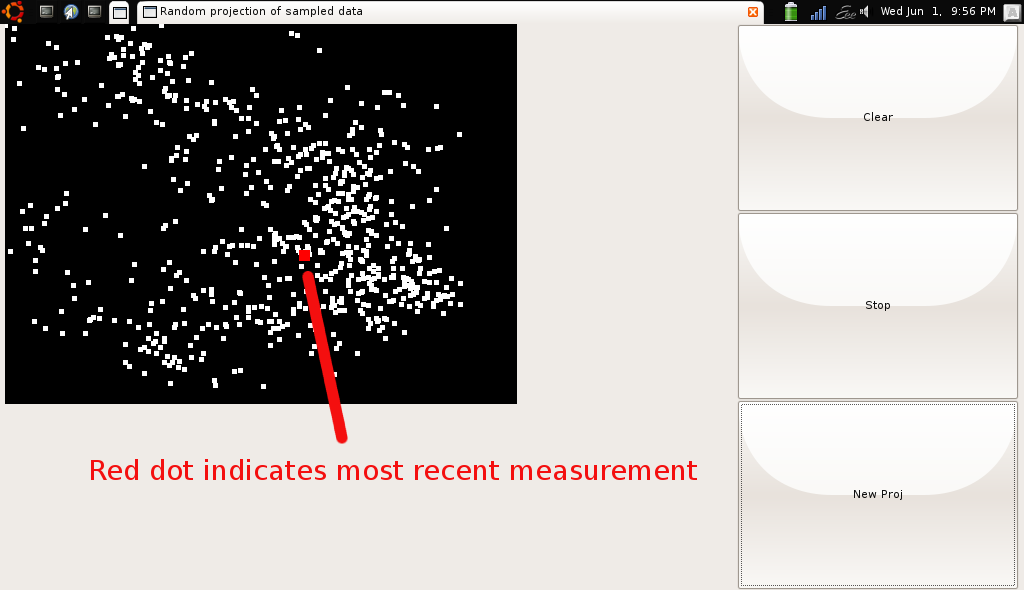 Step-by-step instructions for conducting the experiment: In order to give you a feel for what you should see, here is a sample output file, and at left is a corresponding screen shot. Be aware that even if you use the sample output file, the display may be different since it depends on a random projection.

Software to work with anything that can play sound files
Instead of using special hardware for transmitting signals, anything that can play a sound file can be used. Matched filters can be used to discriminate between the different choices of signals, though as in the previous experiment, several transmitters can emit the same signal. Rather than conducting the experiment in real time, this experiment collects data on request for offline processing. This can enable more experiments that are more carefully controlled. 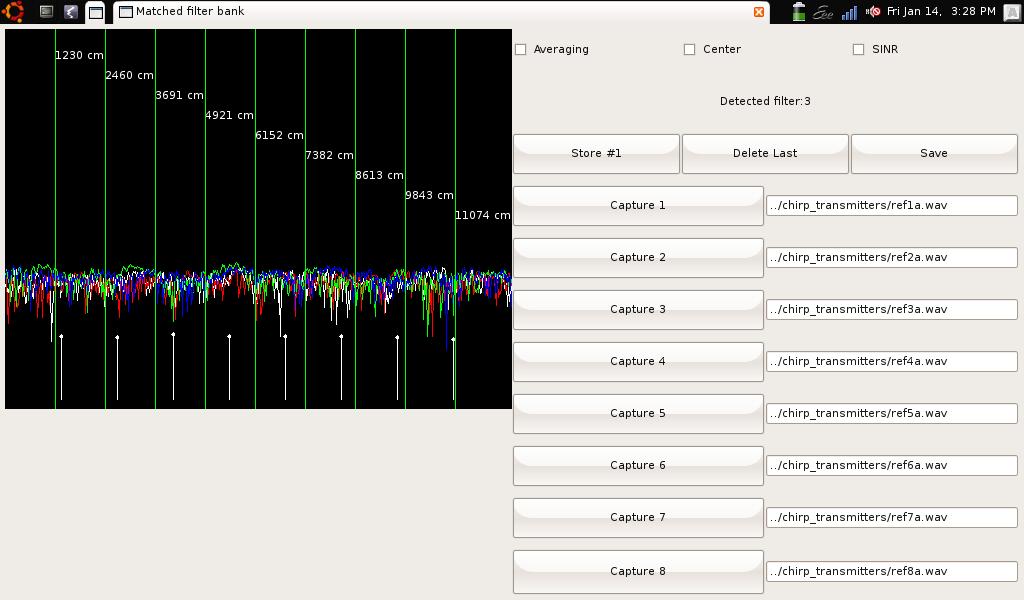 Step-by-step instructions for conducting the experiment: Here is some sample data, and at right is a screenshot of the program in action.

Imaging with wireless access points
Thanks goes out to Daniel Muellner and Mikael Vejdemo-Johansson for the scripts used in this demo!
Instead of acoustic sounders, you can use wireless access points to generate the ambient signals for localization. Here are a few scripts that read data (under Linux or Mac OS) from a wireless card and format it appropriately for projectPoints.py.
Step-by-step instructions for conducting the experiment:

Asynchronous circuits are very easy to see when the logic gates aren't very fast. Although one could use delay circuits to show this with transistorized electronics, it is trivial to make slow asynchronous circuits using relays. Here are the schematics for two example circuits: a Glitch generator and an RS flip-flop.

Website content (c) 2017 Michael Robinson; all rights reserved. The information on this website reflects the views of the author alone and should not be construed as advice.