(The content on these pages may be freely used for educational, noncommercial purposes provided appropriate references are provided. Commericial users are kindly asked to contact me first.)

It is more of a multi-media online short course than a publication, but my DARPA Tutorial on Sheaves in Data Analytics is a pretty comprehensive introduction to applied sheaf theory. It includes a number of videos as well as example software and datasets. Be sure to check it out! 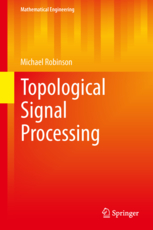 Website content (c) 2020 Michael Robinson; all rights reserved. The information on this website reflects the views of the author alone and should not be construed as advice.